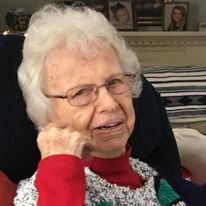 Born April 4, 1925, in Potter Brook, she was the daughter of William Richard and Agnes Mae Robbins Truax.  On August 28, 1943, in Potter Brook, she married Wilbert Richard Metcalf, who predeceased her in 1977.  A graduate of Westfield High School, she was employed by Galeton Production during and after World War II from 1944 – 1947 and The Goodie Gallery in Milledgeville from 1981 – 1992.  Doris was a member of Order of the Eastern Star #33 in Westfield, Potter Brook Happy Hour Club, and First Christian Church, Milledgeville.

To send flowers to the family in memory of Doris Mae METCALF, please visit our flower store.