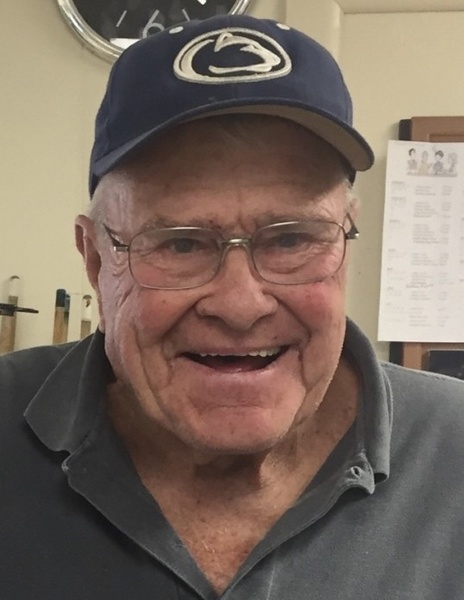 Born December 8, 1928, in the family home in Raymond, PA, he was the son of Preston A. and Minnie H. Mosch Erway.  Eugene “Gene” was raised on a dairy farm and continued that occupation for 40 years, operating a farm primarily of registered Holsteins leading to a successful dairy store in Coudersport.  Soon the dairy store expanded to a bakery, fruit and vegetable market, car wash and eventually the famous Fun and Food Barn entertaining the youth of Coudersport for many years.  Gene was elected as a township supervisor in 1948, serving for 20 years, eventually as president of the Potter County Association of Township Officials.  Gene was a member of Lewisville Lodge #566, F&AM in Ulysses, PA and a 65-year member of the Coudersport Consistory.

Elected a Potter County Commissioner in 1976, he served as chairman for two years.  In 1978, Gene served as campaign manager in Potter and McKean counties for Governor Richard Thornburgh.  He was appointed to the new Department of Aging as the Executor Director of the Council of Aging and two years later the Director of the Pennsylvania Weatherization Program, a challenging program designed to assist middle and low-income residents of Pennsylvania.  In 1982, Gene transitioned to the Division of Employment Services for 10 years.

Upon his retirement from state government, Eugene dipped his hands into a multitude of other occupations in sales, restaurant ownership and management.  In 1995 he moved to Swann Keys, Delaware, where he began his final vocation as a landscaping professional.  Gene managed the staff and landscaping operations at Salt Pond Golf Course for 14 years.  He was then recruited to establish the course landscaping at the Bayside Resort Golf Club in Selbyville, DE until retiring in 2019.  Eugene was also very involved in the homeowner’s association at Swann Keys.  For the remainder of his life, he kept his fingers in the dirt at his “farm” where he was known for his proliferation of fruits and vegetables.

Per Eugene, the last and most important point in his life was seeing Dorothy’s and his children grow up and develop into great citizens and raising wonderful grandchildren.

To send flowers to the family in memory of Eugene F. "Gene" ERWAY, please visit our flower store.