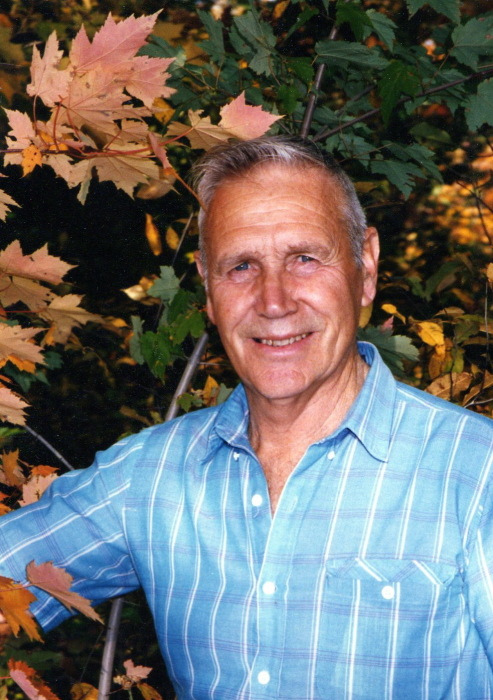 George Olmsted MORLEY, 97, of Ulysses, PA, passed away Thursday, June 24, 2021 in UPMC Cole, Coudersport.  Born March 29, 1924, in Coudersport, he was the son of Edwin J. and E. Elizabeth Olmsted Morley.  On September 17, 1948, in New Hampton, NY, he married the former Maude A. Morley, who survives. A 1942 graduate of Ulysses High School, he worked as a pipeliner for 30 years and was a self-employed excavator for over 15 years. He was a member of the Ulysses United Methodist Church, Lewisville Lodge #556 F&AM in Ulysses, and served on the Ulysses Borough Council for 32 years.

George was a very social person, who loved life and people.  Everybody was his friend or potential friend.  No matter where he went, he would see someone who knew him.  He enjoyed life and did not want it to end.  There was always more music to hear and learn, another dance, or family event to enjoy.  He was an avid and talented dancer.  Maude and George’s graceful dancing was a delight to observe.

Music was George’s life-long passion.  He was blessed by God with a strong, beautiful singing voice.  He used his versatile voice for singing with classical and church choirs, as well as barbershop groups, country music, and calling for square dances.  Known for singing while working on the pipeline, his co-workers nicknamed him “The Singing Pipeliner.”

Family was his other passion.  These two passions became intertwined in 1960 when he taught himself to play guitar.  A family band was formed after he taught some of his children to play the ukulele, guitar, and bass.  Together, Maude and George began to encourage their children to sing and harmonize.  It gave George great pleasure to have the family perform at many events.

Well-known for his humor, George was an endless source of entertainment to family and friends.  As the great-grandchildren came along, each would be taught the “fine art” of making faces.  Because of his tutelage in this art form and other silliness, they dubbed him “silly grandpa.”

George spoke often of his idyllic childhood on the family farm in Gold where his older sister, Mary, younger brother, Jack, and he grew up.  Always an excellent storyteller, George would regale his family and friends with story after story about the mischievous escapades that he instigated on Jack and others.

George’s most favorite spot in the world was Morley Hollow in the Gold area near where he grew up.  To provide a place where the family and future generations could gather in this beautiful spot, George built a large building called the Morley Pavilion. Family parties and reunions are held here.  Very popular senior dances used to be held here with music being provided by George’s “No Name Band.”

The next favorite place for George was the big white house on the corner in Ulysses, PA.  George and Maude settled here in the summer of 1953.  This house remained the family home for 66 years.  It became known to the family as “Grand Central Station,” when their family grew to ten children.  As the next generations were born, the house was filled with love and laughter as it rocked with the activities and chaos of their ever-increasing family.

Friends may call at God’s Country Ministries, 1237 E. Second Street, Coudersport, PA on Monday, June 28, 2021 from 10:00 – 11:00 AM with Funeral Services following at 11:00 AM.  Funeral leaders will be Gary Morley and Jon Haley.  Burial will be in the Ulysses Cemetery.  In lieu of flowers, memorials may be made to a charity of the donor’s choice.