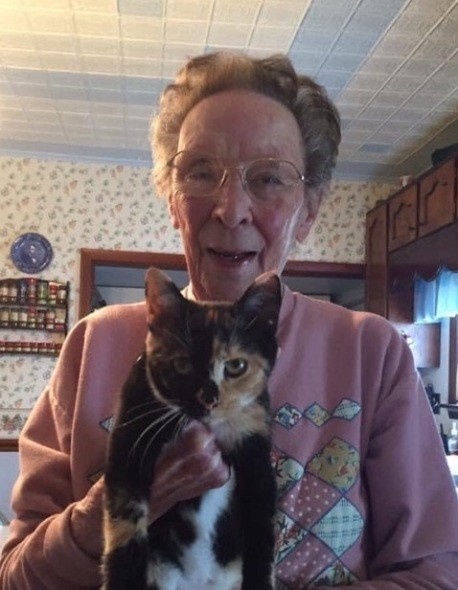 Born May 6, 1929, in Belmont, she was the daughter of Anson Daniel and Margaret Hile Chapman.  On September 2, 1949, in Wellsville, she married James B. Artlip, who predeceased her on December 10, 1984.  A graduate of Genesee High School, Genesee, PA, she was employed by Bausch and Lomb, Market Basket, Giant, and Sears.  She also worked as a private duty caregiver for the elderly.  Joan served as a foster grandparent in Monica Finn’s classroom at the Wellsville Elementary School for several years.  She loved animals and cared for neighborhood cats.

Surviving are:  a son, Bernell A. “Bernie” (Jaquelynn) Artlip of Stannards;  two grandchildren, Tonia Braddock of Post Falls, ID and Mindi Artlip of Bradenton, FL;  a sister, Sharon (John) Johnson of Aberdeen, WA;  two brothers, Donald (Norma) Chapman of Mills, PA and C. Lance (Linda) Chapman of  Pendleton, OR;  nieces and nephews.  In addition to her husband, she was predeceased by her long-time companion, Richard O. Bartlett, on June 22, 2019; and a brother, Dane A. Chapman, on March 15, 2019.

Private burial will be in Stannards Cemetery.