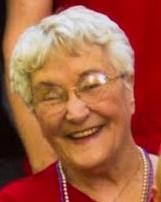 Marjory L. Blass Hawkins, 86, of Great Falls, MT, formerly of Coudersport, PA, passed from this life into the everlasting arms of Jesus on Wednesday, February 1, 2017 in Benefis Hospital, Great Falls. Born September 18, 1930, in Coudersport, PA, she was the daughter of Everett R. and Marian E. Neefe Blass. After graduating with honors from Syracuse University as a Registered Nurse, she married Paul Edward Hawkins on June 14, 1952. Together they shared Paul's Air Force military career. In Paris, their first child Eric P. Hawkins was born (currently of Coudersport, PA), then a daughter Linda M. Hawkins at Andrews AFB, Maryland (currently of Great Falls Montana), and Jay D. Hawkins was born in London, England. After military retirement, Marjory and Paul moved to sunny Barefoot Bay Florida. It was there in 1993, that, sadly she and Paul divorced. Despite the divorce, Marjory always considered herself married till "death do we part" which did occur when Paul predeceased her in May 1997. Marjory had moved to Great Falls after her divorce in 1993 fulfilling a childhood dream of living in the Wild, Wild, West. There she lived and blessed her daughter, son-in-law, and their family with her presence, wisdom, and wit.
As a true lover of Jesus, she lived out the greatest commandments to 'Love the Lord your God with all your heart and with all your soul and with all your mind.' To do this she would 'pray without ceasing' and 'in all her ways she acknowledged God so that He could direct her path.' Everything she did she would cover in prayer. She was a faithful member of Our Lady of Lourdes Church. She lived out the second of the greatest commandments, which is to 'love your neighbor as yourself.' Marjory lived this out daily by putting herself last. The only time she struggled with that commandment was when she would play a frequent game of scrabble by only permitting words she was familiar with from her lifetime, excluding any computer terms which were familiar to her grandchildren. She would give of herself, whether as a volunteer hostess at the Great Falls Senior Center or as a prayer warrior as she advocated on behalf of veterans, friends, family, and strangers, or by sharing her money to many charities, (and it wouldn't be unusual to catch her passing a $20 bill to a stranger in a restaurant), but mostly she would offer her smile. It was her best feature and her most precious talent. It would come with her stories, through her sarcasm, or with her spunk. She'd bring joy whether you'd like it or not. She will be missed. We have been truly blessed.
Surviving her are: one son, Eric Hawkins of Coudersport; one daughter, Linda (Bud) Grovhoug of Great Falls; two grandchildren, Kristina Grovhoug and Nathan Grovhoug, both of Great Falls; two great-grandchildren, Christian and Elijah; a brother, Everett (Rita) Blass, Jr. of Coudersport; nieces, nephews, and cousins. She was predeceased by two sons, Jay D. Hawkins and infant Andrew John Hawkins; granddaughter, Ambre Lee Yandell Grovhoug; and sister, Charlotte I. Freeman.
Friends may call at the Olney Funeral Home & Cremation Service, Ulysses, PA on Saturday, February 11, 2017 from 10:00 - 11:00 AM, with Funeral Services following at 11:00 AM. The Rev. James C. Campbell will preside. Burial will be in Sweden Hill Cemetery, Coudersport.
Memorials may be made to Ulysses Library, P.O. Box 316, Ulysses, PA 16948.
Online condolences may be expressed at www.olneyfuneralhome.com.
For family and friends in Great Falls, there will be a service celebrating Marjory's life at a future date.

To send flowers to the family in memory of Marjory L. Blass HAWKINS, please visit our flower store.