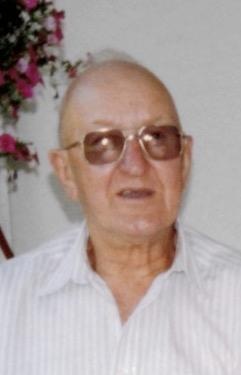 Robert F. WALTERS, 92, of Harrison Valley, PA, died Sunday, March 19, 2017 in his son's home in Harrison Valley.
Born August 3, 1924, in Westfield, PA, he was the son of G. Gordon and Cleva Luce Walters.
On July 21, 1945, in Westfield, PA, he married the former Lillian L. Cary, who predeceased him on November 5, 2009.
He was employed by Eberle Tannery in Westfield for 39 years.
Surviving are: two sons, Robert (Lois) Walters of Ellisburg, PA and Larry (Christine) Walters of Westfield, PA; a daughter, Donna (James) Plyler of Genesee; eight grandchildren; 26 great-grandchildren; six great-great-grandchildren; a sister, Lillian Pauline McPhail of Coudersport; and nieces and nephews. In addition to his wife, he was predeceased by three brothers, Merritt L. "Pete" Walters, Harold Walters, and Clyde Walters; and three sisters, Bernice Clark, Arlene Steadman, and Doris Van Pelt.
Friends may call Tuesday, March 21, 2017 from 2:00 - 4:00 and 7:00 - 9:00 PM at the Olney Funeral Home & Cremation Service, Ulysses, PA, where Funeral Services will be held on Wednesday at 11:00 AM. The Rev. Duane Burdick will officiate. Burial will be in Riverview Cemetery, Potter Brook, PA.
Memorials may be made to Susquehanna Hospice, 24 Walnut St., Wellsboro, PA 16901.
Online condolences may be expressed at www.olneyfuneralhome.com.

To send flowers to the family in memory of Robert F. "Bob" WALTERS, please visit our flower store.