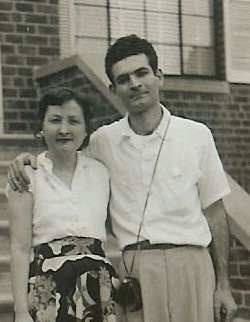 Born July 4, 1928, in New York City, he was the son of Karnik and Loutfia “Olga” Degermenjian Chorbajian. He is remembered by those closest to him for his mathematical mind and fast wit. He lived his last years of life in the Finger Lakes Region of New York State. Maintaining a strong New York City identity, he had avid interest in operatic and orchestral music and attended performances at Lincoln Center and Carnegie Hall throughout his lifetime. He also lived for brief periods in Orlando, FL and Mission Hills, CA. Following a family tradition, he pursued a mathematics major at New York University from 1944 – 1946 after receiving scholarship opportunities from Harvard and Cornell Universities. His father, who was a survivor of the Armenian genocide and native of Marash, Turkey attended Sorbonne and Oxford Universities in Europe. Excelling academically was a Chorbajian characteristic. Like many at the time, he entered the United States Army on July 11, 1946 to serve in the National Emergency Occupations Forces in the Artillery Training Program. He also was selected for the United States Army Counter Intelligence Corps (Army CIC) and was stationed in Munich, Germany and Yokohama, Japan, south of Tokyo. As a returning soldier, and through family introductions, he met and married Marguerite Caroline Kolligian on November 18, 1951. Sharing a mutual Armenian American culture as children of genocide survivors, they instilled during their 42-year marriage the importance of heritage, culture and education to their daughter Christine.  Marguerite predeceased him on February 20, 1994. After the death of his first wife, he met and married another Armenian American, Mary, in 1999 and they remained married for 12 years until her death on June 17, 2011. She is buried in Bath National Cemetery, Bath, NY. His career interests changed and ranged from bookkeeping for commercial and non-profit organizations to managerial level positions in the burgeoning audio stereo industry in NY from the 1960’s – 1980’s, primarily at Sam Goody’s flagship store in Manhattan. He was fascinated by the sound engineering and design of electronic audio systems of the time. The work also blended his mathematical thinking with his passion for classical music. He later expanded his retail interests to furniture sales prior to retirement to Orlando, Florida. Amused with solving equations, he was a man who spent hours strategizing fast paced moves at a backgammon board with family and friends. It was his signature way of snickering behind watchful eyes and a calm face prodding his opponent with his mind moving like a whip.

Burial will be in the Bath National Cemetery, Bath, NY.

Arrangements are under the direction of Mulholland-Crowell Funeral Home, Wellsville, NY. Online condolences may be expressed at www.wellsvillefuneralhome.com.

To send flowers to the family in memory of Zareh CHORBAJIAN, please visit our flower store.